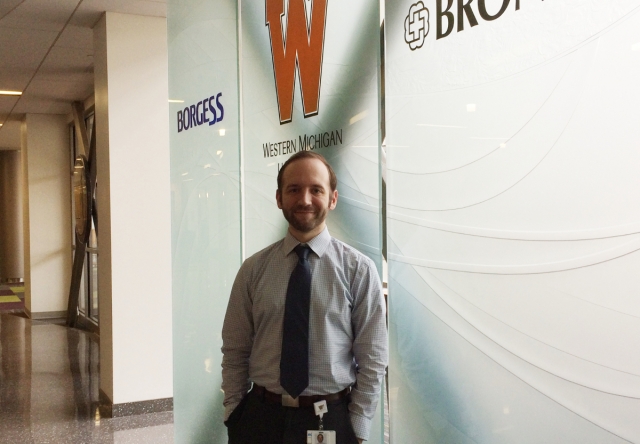 Matt Siuba relishes science, the chance to tackle and discuss complex topics. He says he's fueled by a passion to work closely with people and the chance to teach, to share knowledge.

All of that, Siuba said, is why he made the decision as a junior at Purdue University to become a doctor.

"It allowed me to solidify all of my interests into one area," said Siuba, 31, who graduated from Michigan State University's College of Osteopathic Medicine in 2013.

Now, Siuba finds himself just months away from completing his Internal Medicine-Pediatrics residency at WMed and on the cusp of beginning a prestigious, two-year fellowship in adult critical care at the Cleveland Clinic.

The work that awaits Siuba at the Cleveland Clinic is a point of pride. After his graduation from medical school, he said he wrestled with what to do next in residency. He considered anesthesiology and psychiatry but eventually found the "perfect fit" in Med-Peds.

"The perfect fit was doing something in medicine and seeing people across the age spectrum," Siuba said. "I think Med-Peds is really good for people who enjoy breadth and depth. The place where I think it really pays off is doing really comprehensive primary care … Even if you don't see the whole age range, you'll still understand the pathology across the entire age range and it will matter."

As it turned out, the decision about where to complete his Med-Peds training was one Siuba did not have to wrestle with, in part from the experience he gained at WMed as a medical student during a four-week elective rotation in nephrology.

Siuba said he was on the rotation for just a few days before he knew WMed would be at the top of his list for the Match in 2013.

He said the atmosphere at the medical school during the rotation offered a nice balance between academic rigor and fun, and faculty and residents in the departments of Internal Medicine and Pediatrics were "enthusiastic and had good collegial relationships."

"I was really very impressed by the quality of education I received," Siuba said. "It was nice to be able to see people in the clinical setting or the lecture setting and they were all so sharp, all really clinically adept … People here were really skilled but also really grounded and taking care of patients was fun for them and they really took it to heart that it was something that, at the same time, was really important.

"That's not something I saw everywhere."

Growing up, Siuba lived in Illinois, Indiana and Michigan. At Purdue, he majored in neurobiology and physiology, graduating in 2008.

After completing his undergraduate studies, Siuba spent a year teaching chemistry and earth science to juniors and freshmen at a now-defunct charter school on Chicago's West Side. In that role, Siuba said he was responsible for more than 100 students, many of whom were poor and as much as four grades behind in reading and math.

To this day, Siuba said he is still in touch with the students who were under his charge for that one year.

"Teaching was probably one of the most important things I've done with my life," Siuba said. "It was a pretty formative time."

Siuba's passion for teaching has only grown since coming to WMed and he said that one of the things that filled him with excitement when he came to Kalamazoo in 2013 for residency was the birth of the new medical school and the opportunity to teach medical students when WMed's inaugural class arrived in 2014.

Since then, Siuba said he's gotten to teach – and work with – third-year medical students at WMed during their clerkships. He also also has worked with first- and second-year students in the clinical setting, he said. He is currently co-chief resident in the Med-Peds Residency Program.

"It's nice to see the growth that has come since (2014), as far as more faculty and the engagement with the community," Siuba said. "It was clear from the beginning that the need for residents to work with students was very high and I was excited about that."

In addition to the teaching he's done, Siuba said the medical school's Med-Peds program has been challenging during the last four years. He said his mentors and faculty in the program have been invaluable and equipped him with the skills that led to him receiving offers for eight interviews for fellowships, including the Cleveland Clinic, as well as fellowships at the Mayo Clinic, Stanford University School of Medicine and the University of Pittsburgh.

"That to me meant that I had all the right pieces here in my education that made that possible," Siuba said.

During his time in Kalamazoo, Siuba said he has formed "fantastic" mentoring relationships in the critical care units at Borgess Medical Center and Bronson Methodist Hospital, as well as with faculty in WMed's departments of Internal Medicine and Pediatrics. Additionally, he said he has gotten the opportunity to see "a broad range of pathology" and did more than 160 critical care procedures.

"You see things here that you only read about in other places," Siuba said. "Going to fellowship is going to kind of take that to the next level."