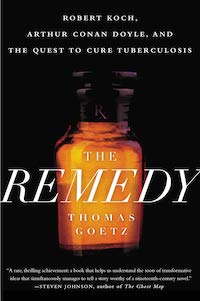 Members of the medical school community are invited to explore the race for a remedy for tuberculosis in 19th Century Europe in this year’s selection for Common Read.

Common Read, an annual program now in its eighth year, provides a shared learning experience for WMed students, residents, faculty, and staff. This year’s selection is The Remedy: Robert Koch, Arthur Conan Doyle, and the Quest to Cure Tuberculosis by Thomas Goetz.

In the book, which was published in 2014, Goetz explores the history of tuberculosis, the world’s most lethal disease, and the quest of German doctor Robert Koch, who discovered the bacteria that caused the disease. The Remedy details Koch’s remedy for tuberculosis along with doctor and writer Arthur Conan Doyle’s criticism of Koch’s remedy as the world, desperate for a cure, paid attention. The book chronicles how Conan Doyle abandoned medicine in favor of writing, creating the fictional character Sherlock Holmes, which was inspired the very scientific methods of Koch’s that Conan Doyle had criticized.

Common Read will be held Wednesday, September 22 at 6:00 p.m. online via Microsoft Teams. Goetz will be the keynote speaker, and the hour-long event includes time for discussion with him.  Common Read is open to enrolled students, employed faculty and staff, WMed alumni and health practitioners employed at Kalamazoo’s teaching hospitals.

Goetz is a science journalist, entrepreneur and author and is a former Entrepreneur-in-Residence for the Robert Wood Johnson Foundation. Goetz co-founded Iodine, a website that was acquired by GoodRx in 2016, and he currently serves as GoodRx’s chief of research. He previously worked as the executive editor of WIRED.

Common Read serves to broaden the concepts of what it means to be a healthcare practitioner and build the learning community at the medical school, said Liz Lorbeer, leader of the event and chair and associate professor in the Department of Medical Library.

“We’ve never done a Common Read for a book focused on medicine in 19th Century Europe,” Lorbeer said. “I think it provides a different perspective about how medicine evolved in Europe and came to the United States and how we have the foundations of medicine in this country which was previously a very European system.”

Lorbeer said she found several interesting parallelisms in the book’s journey to find a remedy for tuberculosis and the race to develop a vaccine during the much more recent COVID-19 pandemic. It highlights the incredible speed of medicine, she said.