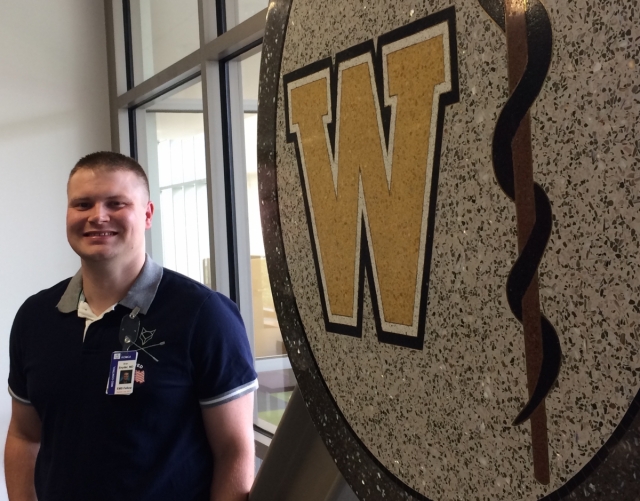 For Dr. Brian Snyder, the decision to join the U.S. Army opened the door to realizing his dream of becoming a physician.

Now, 11 years later, he's at WMed, working alongside Dr. Kevin Patel as one of two EMS fellows at the medical school.

It is an opportunity that, after serving his country and gaining valuable experience in the military, is feeding his passion for academic medicine, Dr. Snyder said.

"I like teaching," he said. "I really can't go very long without, at some level, teaching someone something."

Dr. Snyder's journey into medicine began when he was an undergraduate at Blackburn College in Carlinville, Illinois. The oldest of eight children and a native of Gibson City, Illinois, he played football at the private work college while majoring in biology and chemistry.

When it came time for medical school, Snyder said he made a decision he would make again "in a heartbeat," as he applied for "and received" a scholarship from the F. Edward Hébert Armed Forces Health Professions Scholarship Program.

As an HPSP scholar, Dr. Snyder joined the U.S. Army as a second lieutenant in 2005 and began his studies at Southern Illinois University School of Medicine, He earned his MD degree in 2009.

Dr. Snyder said it was during his third year of medical school, while on a rotation in Emergency Medicine, that he realized what he wanted to do in residency.

"For me, the ER fits me personally," he said. "Specifically, I think I realize that in the emergency department you make the biggest change in the shortest time ... other than trauma surgery. It's not for everybody but it does have that instant gratification.

"There's a direct ability to influence the clinical outcome right there at the bedside."

In Snyder's case, he was assigned to Fort Lewis, near Tacoma, Washington, after medical school and began a three-year residency in Emergency Medicine at Madigan Army Medical Center.

Dr. Snyder said he did rotations at the army hospital, but also got the chance to work at other facilities and gained valuable experience at a children's hospital, as well as in community medicine, trauma and burn care.

After residency, Dr. Snyder was assigned to Fort Stewart, Georgia. He had been there for a year, he said, when he served a one-month stint as interim chief of the Emergency Department at the military hospital, Winn Army Community Hospital.

Later, in 2013, he was deployed to Camp Bastion which, at the time, was a large British military camp in southwestern Afghanistan. During his 10-month deployment, which ended in May 2014, Dr. Snyder was part of a team of doctors that staffed an international hospital in Afghanistan.

While there, he said he helped treat U.S. Marines and soldiers from the Afghan National Army, as well as Jordanian and Georgian forces, coalition forces and contractors, among others. Most often, he helped treat gunshot wounds or injuries suffered in a blast, he said.

After he returned from his deployment, Dr. Snyder said he sought an EMS fellowship in the Army. After he wasn't chosen, he said he began looking for a similar opportunity outside of the military.

He researched at least five fellowships, at that point. As it turned out, he began looking at Kalamazoo at the urging of Dr. Daniel W. Robinson, a 2014 graduate of WMed's Emergency Medicine Residency Program, whom Snyder met and befriended when Robinson was a medical student at the University of Washington.

"He really was easy to talk to," he said of Dr. Fales. "With someone who had that much time for an applicant, it just felt right and it put a great face on the program."

Snyder made the move to Kalamazoo with his wife and young son and began his fellowship at WMed in October after completing 11 years of service in the U.S. Army. Since coming to Kalamazoo, Dr. Snyder said he and his family have been trying to do "some of the truly Michigan things" while also getting the chance to reconnect with - and be closer to - family in Illinois.

As part of the curriculum for WMed's one-year EMS Fellowship, Dr. Snyder and Dr. Patel get an array of opportunities in EMS operations, administration, medical oversight, education, teaching and clinical care in the pre-hospital environment. They also serve as assistant medical directors for the Kalamazoo County Medical Control Authority, an agency charged with coordinating and overseeing the EMS system in Kalamazoo County that is housed within the medical school's Department of Emergency Medicine.

Dr. Snyder and Dr. Patel also man a response vehicle that allows for them to respond to different scenes and take part in quality improvement activities in the field.

"The residents here have a distinct flavor of a lot of EMS,"Dr. Snyder said. "The Emergency Medicine residents get a lot of different experiences. My goal is to learn as much as I can about each of the flavors."