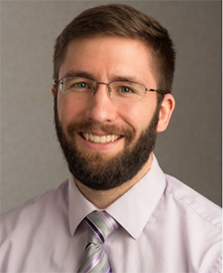 His work as a family physician and public health professional are more than just a job to Dr. William Nettleton.

It is, Nettleton says without hesitation, "a calling."

"I've always been interested in taking care of individuals and families, but also taking a step back and taking care of a whole population and communities," Nettleton said recently. "That takes two different philosophies and skill sets, but it fits me as a person."

Earlier this month, Nettleton, 31, joined the faculty at Western Michigan University Homer Stryker M.D. School of Medicine as an assistant professor in the medical school's Department of Family and Community Medicine, a role in which he will see patients at Kalamazoo's Family Health Center while also teaching resident physicians and medical students at WMed.

The position is part of a new regional partnership between the medical school, Kalamazoo County Health & Community Services and the Calhoun County Public Health Department, and in addition to his duties at WMed, Nettleton will serve as medical director for the two county agencies.

Nettleton's work at the medical school and the two health departments will meld his passions for providing quality clinical care for patients throughout their lifetime while fostering and promoting partnerships and policies that improve the health of the entire community through evidence-based practices.

"Those partnerships are really important when you're talking about working on that population level," Nettleton said. "There's a lot of work to be done here and I want to be a part of that. For the next couple of months, I really want to listen.

Nettleton's arrival at WMed marks a return for him to Southwest Michigan. His parents live in Battle Creek and he is a graduate of Lakeview High School.

Nettleton attended Hope College in Holland where he earned a degree in philosophy and biology in 2007. He has a master's degree in Public Health and he graduated from Wayne State University School of Medicine in 2012.

In June, Nettleton completed a four-year dual residency in Family Medicine and Preventive Medicine/Public Health at the Oregon Health & Science University in Portland. He is board certified in both family medicine and preventive medicine and public health.

Jim Rutherford, health officer and director of Kalamazoo County Health & Community Services, said recently that his agency is excited about the new partnership with WMed and Calhoun County that led to Nettleton's return to Southwest Michigan.

"It's a partnership which will allow for increased public health surveillance and protection for all residents in a society where we are daily encountering the resurgence of disease, aging infrastructure, environmental contaminants and disparities in access to care that pose a threat to the public's health."

As medical director for Kalamazoo and Calhoun counties, Nettleton will be on call 24 hours a day, seven days a week. He will spend 12 hours a week on-site working at Kalamazoo County Health & Community Services and eight hours a week at the Calhoun County Public Health Department.

Over the next couple of months, Nettleton said he wants to gather input from the community, gather and analyze data and examine the community partnerships that currently exist in Kalamazoo and Calhoun counties around improving residents' health.

From there, he said he wants to hit the ground running to provide evidence-based best practices aimed at combating the biggest health issues in the two counties, including substance abuse and the ongoing opioid epidemic, high STD-infection rates and the significant health disparities that exist in terms of infant mortality rates.

"Many of these types of interventions require multi-lateral partnerships," Nettleton said. "It's not only valued, it's necessary. It can't happen without collaboration and partnership and mutual respect."

Nettleton said he is excited about the work he will undertake at WMed and the two county health departments. He was drawn back to the region by what he said is a strong sense of partnership, community and philanthropy.

Nettleton said he knows that the kind of changes he hopes to see at the community level will not happen overnight in the region. That, he says, was a lesson he has learned over time, especially during a year he spent in India prior to pursuing his MD degree at Wayne State University.

During his time in India, Nettleton volunteered for a non-governmental organization and got an up-close look at the blend of practicing medicine and public health. The work took him to the deserts, jungles and red-light districts of India.

He recalled a key interaction for him during that year occurred while working as part of a program focused on reducing maternal and neonatal mortality. While visiting a village, he saw a young baby covered in blankets and, in that moment, concluded "no one could control where or to whom they're born."

"It really kind of cemented it (for me)," Nettleton said. "Once you realize that you cannot control to whom and where you were born, it certainly removes your sense of entitlement."

The experience fueled Nettleton's desire to be a family doctor and preventive medicine physician. So too did his aspirations to work in a medical specialty where he felt he could match his talents to the unmet needs of patients and communities.

"I don't think of what I do as a job," he said. "For me, it is a calling to take care of families throughout all stages of life, but to also improve the health of the population and the community."