"The right thing to do": WMed's Dr. Vick Sidhu gives his shoes to patient in need 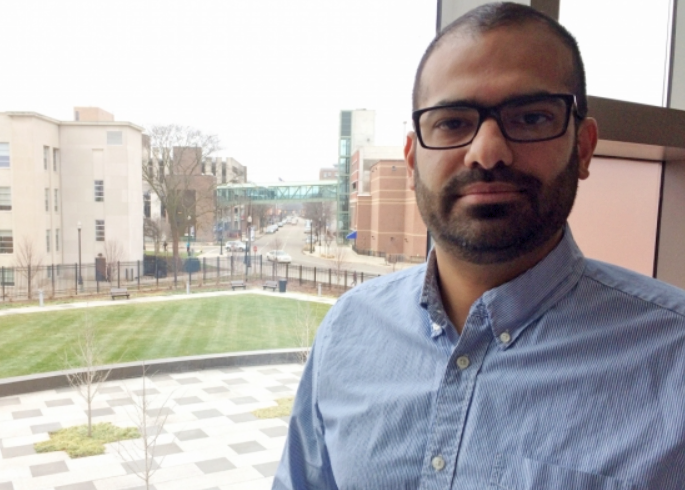 In early January, the man came into Bronson Methodist Hospital with frostbite on his feet, his lack of a good pair of shoes exposing his toes to the winter cold during days and nights spent on the streets of Kalamazoo.

A few days later, he was well, on the mend and ready to leave thanks to the medicines doctors had given him.

But the man had no shoes.

On the floor that day at Bronson, Dr. Vick Sidhu heard nurses talking about the man's quandary, how social workers were working to find suitable footwear before he was discharged from the hospital.

He would give the man his shoes, Sidhu told them, half jokingly. Sidhu figured he could finish his shift with the snow boots he had in his car.

"I was texting my wife and I told her about (the situation)," Sidhu, a third-year resident in WMed's Family Medicine Residency Program, said recently. "She was like, 'Give him your shoes.' At first, it was just this funny idea but when she said that I was like, 'Yeah, why wouldn't I?'"

So, on that cold day earlier this month, Sidhu, 36, retrieved his winter boots from his car and placed his shoes - a pair of brown leather loafers - in a bag and handed them over to the nurses to give to the man.

"The nurse took the shoes into the room and they fit and that was really the end of it," Sidhu said.

But, in many ways, that wasn't the end of the interaction for Sidhu.

As he talks now about the decision to give the man his shoes, he reflects on how the experience serves as a reminder that there's so much more to medicine than just treating a disease or treating a condition.

Sometimes - many times - he says the best treatment has nothing at all to do with medicine. Instead, it has everything to do with treating the patient - treating the person - and lending a helping hand when you can.

"We really don't deal with that (social) side of things, but those are really big factors," Sidhu said. "In that situation, just because it was the right thing to do, it was more satisfying than half of the medical treatments I do because it was meaningful "There's more to taking care of patients than the science.

"(Giving him my shoes is) what the scenario demanded and that's just what needed to be done."

Sidhu said he never saw the man after he gave his shoes to the nurses. Later, he said he heard through second-hand conversation that the shoes fit and the man was appreciative.

Sidhu said recently he didn't want" or need" to see the man's reaction. As he prepares to graduate from residency this summer, Sidhu said he is keenly aware of how fortunate he is to realize his dream of becoming a physician while also recognizing that he is "blessed with a family who cares about me, who pushed me to do well."

"I didn't want a "thank you' or a handshake, it was just unnecessary," he said. "I'm more fortunate than the vast majority of the population given my current situation I think if I'm in a position where I'm privileged enough that I can help someone out, that's just what should happen.

"For me not to give my shoes away when this guy doesn't have shoes and I have several pairs sitting in my closet, that just doesn't make any sense."

Sidhu, who was born and raised in Canada, came to WMed in 2014 after graduating from Saba University School of Medicine. He lives in Kalamazoo with his wife and 9-month-old son and has a new baby on the way.

In many ways, Sidhu was bred for a career in healthcare. His mother was a nurse and he recalls being intrigued by the way she interacted with her patients in "a very caring way."

"When I graduated from high school, I never thought I would be a doctor," he said. "I didn't think I was capable of that so nursing kind of made sense and I ran with it."

Sidhu earned a nursing degree from The University of British Columbia and proceeded to work as an ICU nurse for the next five years. He worked side by side with doctors in Canada, but he said he found the work unfulfilling because "I was sort of intrigued by the science because I was seeing the diseases in patients but I wasn't understanding them."

"I had that desire (to go to medical school) and that evolution, in my mind, just made sense," Sidhu said.

Once he made the leap and began the pursuit of his MD degree, Sidhu said he eventually set his sights on becoming an anesthesiologist. However, he said he changed gears when it came time to apply for residency, deciding that Family Medicine was where he wanted to be.

After he graduates from residency in June, Sidhu said he and his family plan to return to Canada where he wants to work as a hospitalist and eventually transition to an outpatient practice. He has a special interest in obesity medicine.

"I know a lot of disease, such as heart disease and diabetes lead back to obesity and treating the underlying cause of disease is the most satisfying thing," Sidhu said. "Treating a disease at its end stages, it's not as valuable as reversing disease or preventing disease.

"I think it's very meaningful, I think the impact I can have is huge."

Whatever he does, Sidhu said he will carry with him the valuable lessons he took away from his interactions with the man earlier this month at Bronson and his decision to give the man his shoes.

He says that patient care, in many ways, has become a "very scientific" process that he believes has weakened the "human connection" between doctors and their patients. That connection, though, is vitally important, he said.

"I think we shouldn't be afraid to try to do something for somebody," Sidhu said. "Part of that is more satisfying than prescribing some drug because it's just more on a humane level.

"I hope he felt cared for," Sidhu added, mentioning the man he gave his shoes to. "I hope he knew that there are people out there who will go above and beyond to help their fellow human being and I hope that if someone does something nice for you that you want to do something nice for someone else. (Paying it forward) is contagious and it should be."