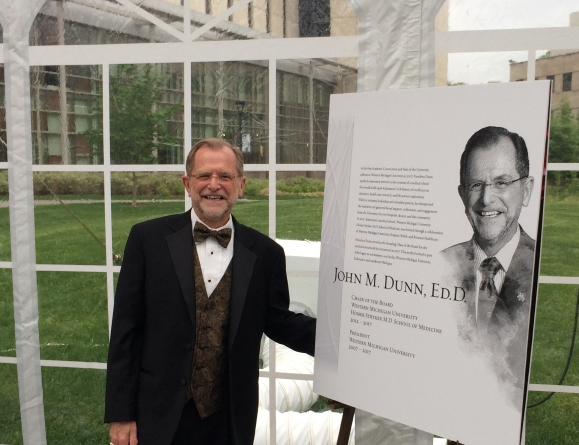 During his 10-year tenure at the helm of Western Michigan University, students have been of paramount importance to President John M. Dunn.

Now, as he nears retirement, President Dunn's vision and his legacy of caring and compassion for students will live on in perpetuity at Western Michigan University Homer Stryker M.D. School of Medicine with the John M. Dunn Endowed Scholarship, an award that each year will cover more than $100,000 in tuition for eligible WMU graduates who are admitted to the medical school's MD degree program.

The newly endowed scholarship was unveiled to President Dunn and the community Saturday evening, May 20, at the medical school's 2nd Annual Imagine Gala. The announcement was made by Ken V. Miller, who is both chair emeritus and a current member of the WMU Board of Trustees.

"This scholarship fund in honor of Dr. John M. Dunn recognizes the key role he has played in developing Kalamazoo's medical school and, perhaps more importantly, it benefits our WMU graduates who are moving on to attend the medical school," Trustee Miller said. "Students have always been, and will continue to be, what is most important to President Dunn."

The scholarship fund is endowed with $2.2 million in financial contributions from key community leaders, members of the WMU Board of Trustees, Borgess Health, and Bronson Healthcare. The initial funding target of $1.2 million was exceeded due to generous community support.

"We are overjoyed with the community support to establish this new scholarship fund for our future medical students," said Hal B. Jenson, MD, the medical school's founding dean. "This scholarship is a way to memorialize Dr. Dunn's commitment to students and lifelong learning."

At his first Academic Convocation and State of the University address at WMU in 2007, President Dunn sparked community interest in the creation of a medical school that would build upon Kalamazoo's rich history of excellence in education, health care, research, and life science exploration. Through his visionary leadership and relentless passion, he championed the endeavor and garnered broad support, enthusiasm, and engagement from the University, Kalamazoo's two hospitals: Borgess Health and Bronson Healthcare -- donors, and the community. 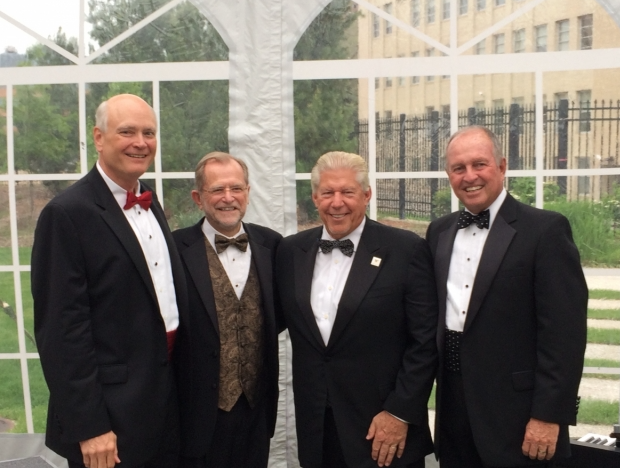 In 2011, the medical school became a reality, formed through a collaboration of WMU, Borgess Health, and Bronson Healthcare. President Dunn serves as the founding Chair of the Board for the medical school and will continue in that role until his retirement on July 31, 2017. The medical school is part of his legacy to the University, Kalamazoo, and southwest Michigan.

"The journey has been a fabulous journey and it has inspired many within the city of Kalamazoo, within our Western Michigan University community, within Southwest Michigan, and that inspiration is part of the aspirational gift that John Dunn has given to each and every one of us, to all of the students, to all of the possibilities there are for all of us in the future," William D. Johnston, a member of the WMU Board of Trustees, said at Saturday's gala as a large crowd toasted President Dunn and his wife, Linda.

When it was his turn to speak Saturday following the announcement of the scholarship fund in his honor, President Dunn said he was "overwhelmed" by the news.